How Dangerous Are Fire Ants In Oklahoma City, OK?

Here in Oklahoma City, OK a lot of people are under the impression we're too far north for red imported fire ants to be an issue. Unfortunately, this is not true. While our winters are much harsher than places further south like Texas, Florida, and the southeastern states where fire ants are an infamous problem, these tough, adaptable ants are capable of surviving much colder temperatures than they originally evolved to tolerate. Let’s talk about the dangers posed by this invasive species, what you can do to deter them, and how the Guaranteed Pest Service of Oklahoma can help. 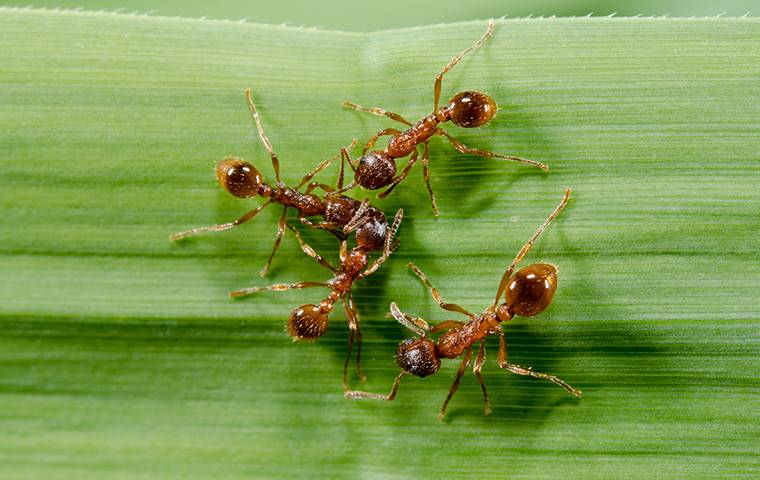 If you find yourself staring down at a single fire ant, you probably won’t think much of it. These unassuming ants are around a quarter of an inch long and brownish red with darker abdomens.

An invasive species, fire ants originally hail from South America, though they’ve been accidentally introduced to many parts of the world including Australia, parts of Asia, and the United States. One of the biggest issues with these ants is they are good at smashing their competition. Red imported fire ants can steamroll a lot of native ant species, outcompeting and eventually displacing them. This behavior can cause major disruptions to local food chains and ecosystems, as native species that eat ants may find it harder to prey on these stinging, aggressive insects. Fire ants also pose a serious threat to native species of ground-nesting birds and reptiles. In some areas, the problem is so severe these ants can cause certain species to become endangered.

The other big issue with fire ants is, of course, their notorious sting. While one or two fire ant stings probably won’t bother you all that much if you aren’t allergic, the problem arises when you disturb their nests. If you accidentally step on or damage a fire ant mound in some way, thousands upon thousands of angry ants will come pouring out to sting first and ask questions later. Fire ant swarms can leave their victims with hundreds of painful, itchy welts that can take a long time to heal, not to mention what can happen to allergic individuals, who may experience swelling, difficulty breathing, or full-blown anaphylactic shock.

Another big problem with fire ants is prevention. While eliminating ant attractants might work well for some species, if fire ants decide your property is a nice place to set up shop, they may colonize it no matter what you do. Fire ants can forage several hundred feet away from their mounds, so prevention is going to be harder than it might be for other ant varieties. Fortunately, there are still some things you can do.

While all these prevention measures can reduce the ant population in your yard, sometimes they’re just not enough. Baits and granules can work well if used properly. However, they may also cause ants to spread out by killing an insufficient number of individuals to destroy the colony or failing to get the queen. If that happens, you may wind up needing professional help.

Here at Guaranteed Pest Service of Oklahoma, we’ve got a combined 45 years of experience dealing with pests specific to the OKC area. Not only can our trained and licensed techs help get rid of the ant mounds you see, but we’ll also help you identify problems you might not have been aware of and offer solutions so the fire ants stay away forever. So give us a call at (405) 689-8240 or visit our contact page to schedule your service today.