Oklahoma City's Bark Scorpion: What Every Resident Should Know 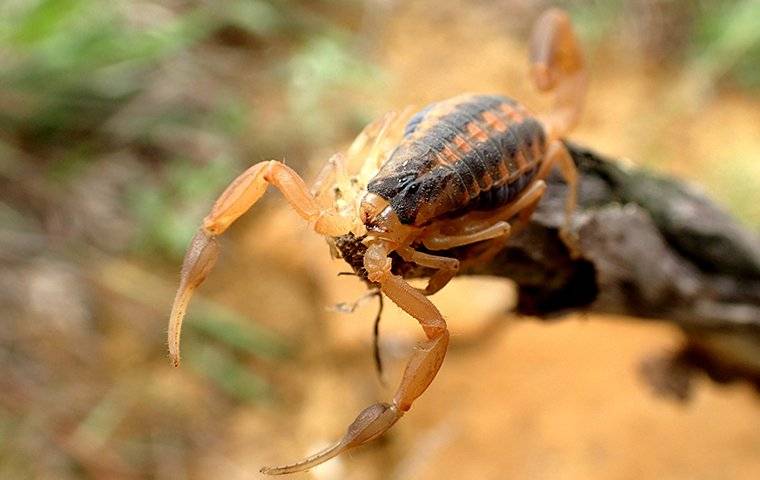 Scorpions have eight legs, two pinchers on the front, and a segmented tail. The tail has a bulb where venom is made and stored and a stinger to inject the venom. They have poor vision and hunt by sound and touch. It is estimated that there are three to five species of scorpions in Oklahoma City, but only one is of concern. The bark scorpion is around 2 ¾ inches long and is the only scorpion known to flatten its tail to fit through small cracks. Bark scorpions are light yellow with two darker stripes on the body and a dark spot behind the eyes. They do not hunt as much as they ambush prey that walks near them.

Bark scorpions mate in the fall or early spring. It can take five months to over a year for the eggs to develop and hatch inside the scorpion. She has between 14-100 in a litter. The babies climb on the mother and stay there until after their first molt. At that point, the young leave the mother and disperse. They grow for about a year before reaching maturity. Most scorpions live three to five years.

Scorpions are shy and hide under and in things around the house. Most people are stung when putting on garments or shoes that have a scorpion hiding in them. Normally, the sting is painful, but the pain subsides in about 24 hours. Some people experience numbness and tingling at the bite site after four to six hours. A few individuals who are allergic to the venom may experience difficulty breathing. Children and the elderly are more likely to experience serious symptoms. Always seek medical attention for a scorpion sting to be on the safe side. The antivenom will stop the medical symptoms quickly.

Bark scorpions are more likely to enter homes when searching for water, to find prey, or when weather extremes like heavy rain displace them from their hiding places. Here are some tips for keeping them out of your house:

Getting Rid Of Bark Scorpions

Because of the pain from scorpion stings and the possibility of a serious medical issue, it is not recommended that you try to get rid of the scorpions yourself.

Call Guaranteed Pest Service of Oklahoma, and we will rid you of the scorpions and their prey species. Our technician will perform a free inspection in and out of your home to identify not only the scorpions but the prey they are feeding on. We will develop a home pest control treatment plan to address all the issues. After initial treatment, service will continue at regular intervals to renew the outside treatments, so no new problems occur. Contact Guaranteed Pest Service of Oklahoma today to keep your home scorpion-free.