If there was a list of downright scary insects and creatures, scorpions would likely be near the top. They are very intimidating in their appearance, as they are generally quite large. Moreover, you could be pinched by their bulky claws or stingers filled with venom. Many American home and business owners will only see scorpions in their nightmares because the pests aren’t local. Those in Oklahoma City, OK have to be leery though; particularly if dry weather is on the horizon.

By studying up on scorpions in the area, you’ll have a better assessment of the potential risks. You’ll also have an understanding of what motivates them and how you can prevent their intrusions. Knowledge is power when it comes to creepy crawlers, particularly with this species. Most importantly, you can learn how the Guaranteed Pest Service of Oklahoma can help. 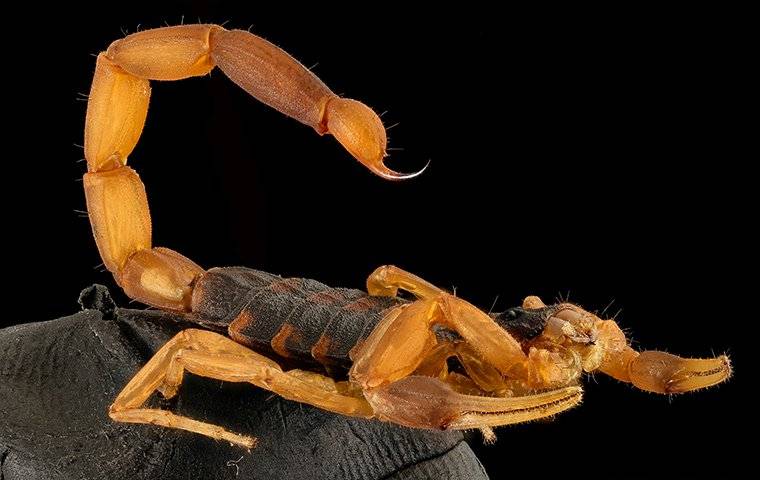 What Scorpions Are in Oklahoma City? What Are the Dangers?

Striped bark scorpions are rather common in the region. True to their name, they have two stripes on their stomach that are black. Overall, they are yellow or tan. They have two large pincer claws, eight legs, and a bowed tail with a stinger. At night is when they are most active, as they favor shade and darkness. Insects, reptiles, and rodents are some of the fellow pests they hunt for. However, they can go without eating for months. Water intake is more crucial for them. Spotting a scorpion in broad daylight is a sign of infestation since they’re nocturnal. There are no other indicators of note, so take it seriously when there’s a sighting.

Outdoors is where striped bark scorpions prefer to be. You may find them underneath organic debris, wood, and rocks. They will only violate human dwellings if they are short on water and/or food. Another factor that sends them indoors is harsh or unfavorable weather. It isn’t difficult for them to crawl through cracks and crevices in utilities, doors, windows, and foundations for entry. Afterward, they’ll get comfortable in:

The sting of striped bark scorpion is nothing short of awful, even though they aren’t typically fatal. When you’re struck, it will definitely be painful. The pricked space on your skin will become numb and swollen. You can anticipate intense itching. Your general health and age will determine if you have further symptoms. People who tend to have allergic responses to venom are bound to vomit or have complications breathing. The same goes for the elderly, children, and individuals with pre-existing conditions. In any event, it’s wise to seek immediate medical attention when a scorpion attacks.

What Can Be Done to Prevent Scorpions?

Maintaining the structural quality of your home or business is essential to ward off scorpions. You’ll also have to be meticulous with your lawn care:

How Will Guaranteed Pest Service of Oklahoma Handle Scorpions?

We at Guaranteed Pest Service of Oklahoma have a wide variety of methods to eradicate scorpions. Among our safe and pet-friendly avenues are baits, granules, liquid applications, and protective barrier treatments. Our expert technicians will find vulnerabilities and high moisture content zones. You’ll have the needed solutions to steer clear of scorpions! Get a free estimate! Call today!