There are thousands of spider species throughout the world, and each one shares a few common features. All spiders have eight legs, two body regions, and possess chewing mouthparts. However, there are three spider species residents of Oklahoma should know how to identify. 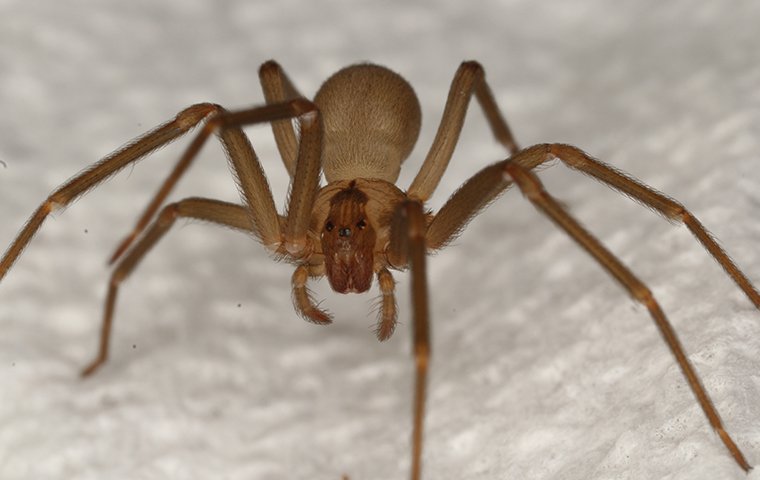 The black widow spider is known for its shiny, black body, as well as the telltale red hourglass-shaped mark found on its belly. This spider is also known to possess potent venom. Black widow spiders grow between one and one-half and one and three-eighths of an inch in length.

This spider species is brown and boasts a dark violin-shaped mark on its body, which is why it's sometimes referred to as a fiddle-back spider. Like the black widow, this spider has strong venom.

House spiders are a yellowish-brown color with a dirty white abdomen and several dark stripes. This spider is also pretty small, only growing to five-sixteenths of an inch in length at most. It's also possible to recognize this species thanks to the serrated bristles on its legs and the elongated abdomen.

Most spiders, including the house spider, are strictly nuisance pests meaning while they don't belong in your home, they're no threat. However, two spider species are considered dangerous and require medical attention when on the receiving end of a bite.

How do I know if I have a spider problem?

Spiders are reclusive by nature, which can make detection a challenge at times. However, some easy ways to determine if spiders have invaded is seeing the spider itself or its web or finding a silken egg "sac."

Since spiders prey on insects, if you notice an insect problem, there is a strong possibility spiders have invaded as well.

Where will I find spiders?

Spiders prefer to live outdoors because that's usually where their prey lives. In general, they hide in their webs or burrows during the day and hunt at night. Spiders prefer to hide in dense vegetation or grass.

As they close in on a building, they will seek out hiding places under decks, behind siding, or in doorways. Once inside, they seek out quiet and dark areas like the basement or the attic.

What do spiders eat?

Spiders are predators, and they prey on other insects. Occasionally, some species may eat vegetation, but this is extremely rare. Since they don't need to eat often, their greatest concern is access to water.

How do I get rid of spiders?

It's annoying to face a spider problem, whether it's a residence or place of business. However, it's never a good idea to tackle spider control on your own since most spider infestations are the result of other insect infestations.

At Guaranteed Pest Service of Oklahoma, our team has worked hard since 1991 to deliver the best solutions backed by training, expertise, and resources to keep your property free of pests, including spiders. Reach out to us to get an estimate for your pest control service needs today.

How can I prevent spiders in the future?

Prevention is difficult but attainable with the right concentration and effort. Some ways to get a head start include: